Great introductory video about Judo by one of the greatest, sensei Neil Adams.

The staff at Ojukan hope you have had a great 2017 and are happy and healthy and looking forward to all of the great possibilities that lie ahead for 2018.

And what better way to get the year off to a fresh start than by dropping in to the dojo for Judo practice!

1st practice of 2018
Ojukan returns to our normal practice schedule tomorrow, Tuesday night, January 2nd. Wash your gi. Come on in. Work off some of those holiday desserts! And get a start on your 2018 Judo goals and practice.

New Pricing for 2018
Our expenses are going going up. We need to adjust our rates to accommodate. Fortunately, our dues are only going up $5/month and are still the best martial arts bargain in town. Moving forward the monthly rate will be $45, and if you pay for 3 months, the price = $120 (a $15 discount).

Recent Promotions
Last month we held testing, and two of our students were promoted:

Congratulations, Riccardo and Phong, much deserved promotions. Keep it up. We all want to see black belts around your waist in the future. You’ve made great progress.

Help Promote Ojukan
Online marketing on the Internet is an interesting process. Right now Ojukan judo comes up on Google searches, but its not always near the top of the search results, so the public doesn’t necessarily see our club when they go looking for places to practice on the west side. So one thing each of you can do to help out, and it wont cost you a single penny, is to submit a review of Ojukan in Yelp! Yep, Yelp reviews bump businesses up higher in Google’s search results.

Follow the link below and give us a good word:

And the staff wants to improve how we teach. Always.

Couple of quick things. Regarding inclement weather, hazardous driving conditions, etc., related to winter, it is Ojukan’s policy to close on the same days that the Hillsboro school district closes classes. That way you don’t have rely on email, phone calls, FaceBook, etc., for notifications. If Hillsboro schools close, Ojukan will close.

Please follow and like us:
Folks:
Just a reminder, we test/grade students every quarter at Ojukan. It’s a great way to re-enforce basics with our students and to give the teaching staff a chance to review class progress and determine what kinds of techniques or theories need more focus.
So, this email is being sent to remind folks that we will be testing on Thursday, November 30th.
Whether you are eligible (time in grade) for promotion or not, the entire class undergoes the assessment.  Just another day in Judo!
Between now and then; show up, train hard, pay attention and ask questions.  Find out what you are expected to know, see if you can step up to the next level and figure out what that will take.
Thanks!
Please follow and like us:

2. Under previous rules when uke rolls over his back, a waza-ari would be given. Under the new rules it seems there is such a thing as a rolling ippon provided “there is no break during the landing”.

3. Landing on the elbow or hands is counted as waza-ari.

4. Bridging (on the back) by uke has long resulted in ippon. But in the past year, referees having been giving hansoku-make for uke landing on the front of his head. I guess you could call this a front bridge. Now it’s official: front-bridging is hansoku-make However, just because uke’s head hits the mat doesn’t mean it’s automatically hansoku-make for uke. For throws like drop seoi-nage, drop sode and drop koshi-guruma, sometimes uke’s head just hits the mat whether he likes it or not. In such cases, it’s not hansoku-make

5. There is a type of osaekomi ocassionally seen whereby tori has both legs underneath uke. This used to be recognized as a legitimate hold-down. Not anymore. This is not osaekomi anymore.

6. Golden score can only be won by a technical score (waza-ari or ippon) or hansoku-make

7. Not taking a classic grip will be penalised by shido if there is not an immediate attack

When the rules were revised after the 2016 Rio Olympics, it was initially decided that the refs would give more time for unconventional grips (e.g. cross grip) compared to before that where there needed to an immediate attack. Now, it seems to have reverted back to immediate attack for any grip that is deemed unconventional. The following trips all require “immediate” attack other shido will be given.

8. Leg grabs will be given shido each time.

When leg grabs were first banned, it resulted in immediate hansoku-make. After the 2016 Rio Olympics, the first leg grab is given shido and the second hansoku-make. Now, a leg grab is considered a normal shido infringement so you could theoretically infringe the no-leg-grab rule twice and still survive. The third time of course results in hansoku-make.

9. Strangles are often done with tori holding onto one of uke’s legs. If that leg is stretched straight, a matte will be called. A situation where tori could previously injure the legs and muscles of uke.

10. Just because uke is on both knees doesn’t mean it’s newaza. If tori has grip control and attacks immediately, he can score. However, if there is a break in action, matte will be called. 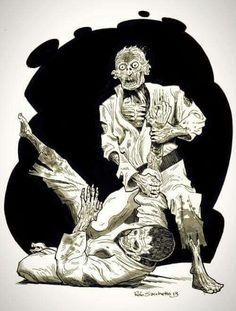 NWJY Meeting:
The Northwest Judo Yudanshakai Board of Examiners Meeting Will Start at
6 pm, Friday, October 6th, 2017 at the Hampton Inn & Suites Tacoma Mall.
The General Meeting and Elections Will Begin Immediately Following the
Conclusion of The NWJY Board of Examiners Meeting.
FIRST AND SECOND PLACE WINNERS IN MEN’S AND WOMEN’S
BROWN/BLACK BELT DIVISIONS WILL BE ELIGIBLE TO COMPETE FOR
THE 2017 RAINIER CUP GRAND CHAMPIONSHIP BELTS.

Having recently practiced no-gi Judo, I’m reminded that no-gi Judo can be used to sharpen a judoka’s technique, because without a gi to grip and pull on, focus becomes much more intense on good positioning, good kuzushi, good movement.  Everybody should have no-gi in their curriculum.  So, having said that, here’s a no-gi tai otoshi, taught by Rick Hawn:

Celebrate with our Dojo family.  If you would like, bring a side dish, dessert, or beverages to share.  Dojo will provide burgers and hotdogs + cake and soda.  There’s a swimming pool as well.

It’s a little funky but USJF assures me they are working on improving their site.  So be patient.  However, here are the patented steps for using the USJF online membership renewal app:

We are working on getting all of the site in working order. To sign up online, please do the following.

1. Go to www.usjf.com
2. Click on Store. Do not click on the link underneath Store.
3. Scroll down to Primary membership.
4. Click on Add To Cart.
5. A box will pop up calle Cart. Click on Proceed to Checkout.
6. An Agreement Policy page will come up. Number 1 & 2 needs to be checked Yes. There is a signature box also. Sign with your mouse if you do not have a touch screen and then click Proceed.
7. The next screen you will be able make sure the fee and type of membership is correct. If so, enter the billing information for your credit card. You will add the actual credit card number on a different page.
8. The next page is your membership information. Enter your information and then click next.
9. The next page is Term of Service. Click the box and then click next.
10. The next page Payment Method. Enter the information for your credit card.

After you are finished you should receive an email saying everything went through.